Katas, or miniature self-contained coding challenges, are an essential part of our curriculum at Northcoders. We encourage students to pick up points on Codewars before they even arrive to study the curriculum, and they continue to work on them, developing problem solving, self-sufficiency and spec skills throughout the course. It's good practise for a tech test interview, but these are itches every programmer should be scratching.

In our mentor meetings, we'll check in on students' katas. We hear reflections ranging from "I can't do this one please just make it stop" - it's obvious how we can help in that situation - to something that on the face of it is very positive: "All my tests pass!" But this is heartening to hear for many reasons - not least because it just could provide us an opportunity to model refactoring code. Here's more with Uncle Bob on the various elicitations of red-green-refactor but it's the essence of that phrase that matters - when you've got your tests green, let's see what can be done to improve things.

In the example I'm going to show you, the specification was to create a function that took a number of pennies, and return an object representing the denominations and amount of the fewest number of coins needed to equal that number.

Alongside a selection of comprehensive, well-organised tests, this is what the student created: 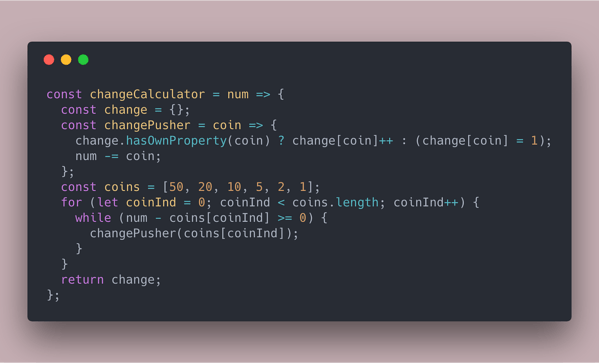 This was one of the "All my tests pass" situations, but you'll notice a lack of euphoric exclamation mark - he knew that improvements could be made. There's a bit more functionality to add - it only handles up to a denomination of '50', and nothing to specify the currency. But at this time, we were more interested in writing better code, not more code.

Well, as polar bear cubs play with each other in infancy so that they can maul seals to death to adulthood, we work on katas to practise skills that we will employ in larger systems. Clarity and maintainability are easy to ignore in the search for functionality - but that would fulfil our red-green obligations... but no -refactor.

First let's look at the logic. We're effectively starting with two pieces of information - a num representing the number of pennies, which is passed in as an argument, and a 'reference array' of the coin denominations, which is defined within the function. That's fine for the kata, but 'in real life', it would make more sense for the denominations to be passed in, as the function is limited to use these coins and any other function that used this information would have to define it too.

Two other small things before moving on: first, some naming. Let's call the functions calculateChange and tallyChange - prefer verbs for functions, and we're not 'pushing'. And we'll rename num to pennies, to be more specific.
Second, there's nothing wrong with .hasOwnProperty here - if anything, it's more semantically expressive of what we are checking here than the 'neater' version I'm about to suggest. But in the context of a function with a clear agenda - the values it adds to the object will always be numbers greater than or equal to 1 - I think we are ok using a 'truthy' as the condition. Let's see the changes so far. 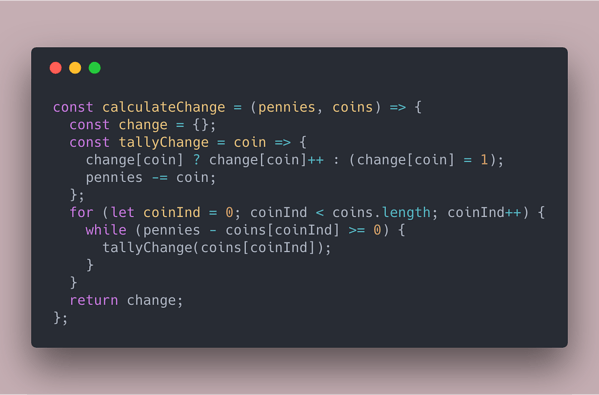 That's cleared up some clutter, and brought some other issues in to relief. I would have renamedcoinIndtoi, because that's an accepted standard for iterating with a for loop, but why use a for loop here? We're iterating through an array, and using this information to build an object. If that's not a job for.reduce, I don't know what is. I've extolled the less obvious virtues of reduce inthis blog post but here's relatively simple tally case, albeit with a couple of kinks we'll explore later. How would this look like with.reducetaking over the iterative logic? 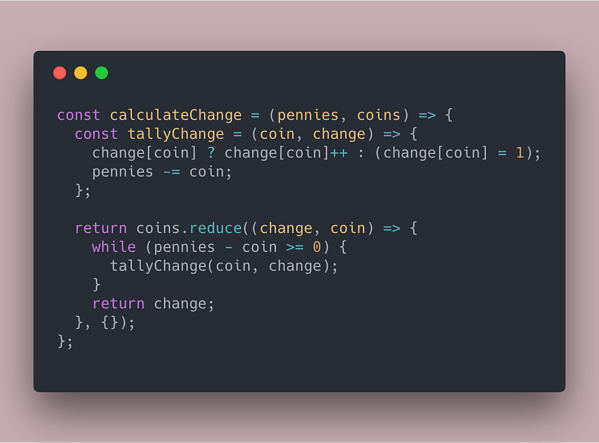 It's neater without the for loop detritus, but there's some serious functional programming issues at play now. I'll reiterate - tests are still passing, but that's not the point. We want to make better code. My main problem is with pennies. Both my reduce callback function and tallyChange reach outside of their scope; the first to read the value of pennies, the second to write it. Let's simplify things, and bring everything within the reduce.

Yep, everything - nobody said that pennies couldn't be part of the reduce. If it's incorporated within the initial value of the 'accumulator', then it remains within the remit of the reduce function, and we avoid our reduce committing any side effect atrocities - reaching outside of the function unnecessarily. We can then discard it at the end.

Whilst we're dealing with side effects, let's re-evaluate the ternary too. Making re-assignments inside a ternary makes it like an 'if-else statement' - one of the benefits of ternaries is that they return values. I think we can make it mildly more semantic with the following though. 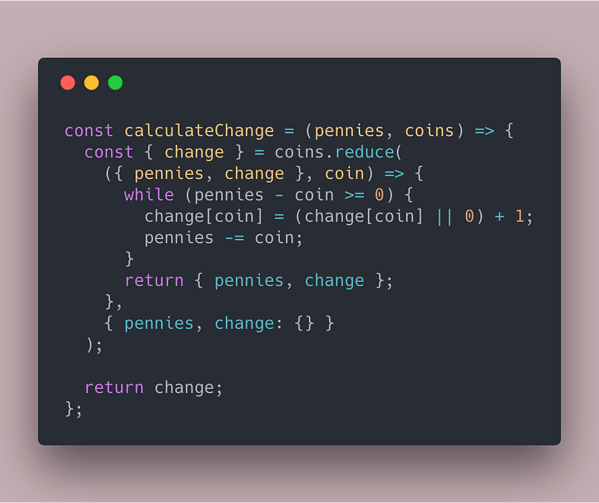 At this stage, I'm close to happy. This is decent functional programming. But it wouldn't hurt to pull out the function we passed into the reduce again. But this time, let's make it a function in its own terms - no point sticking it inside the parent function. More modular -> more reusable. 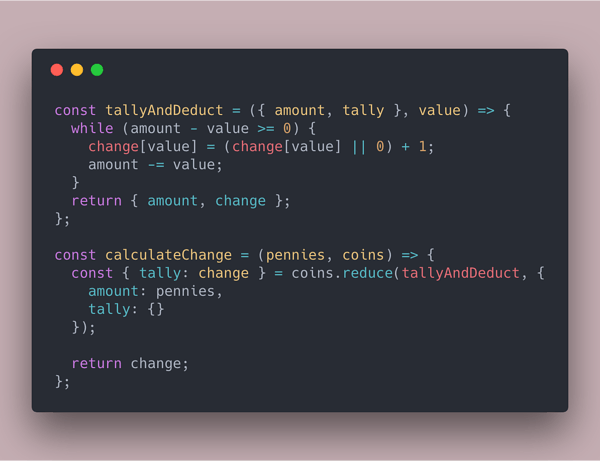 I'm tempted to do something about the while statement - some simple Maths might elicit the data we need, without requiring repeating lines of code. But this is a good place to leave it. I don't claim that this is the best solution, but it does meet our intentions - to refactor our code, considering what might be best practise should this, or something similar, be brought into a larger project. If you've got other ideas, please send a message!

Check out many more of Jonny's fantastic blogs on his website! 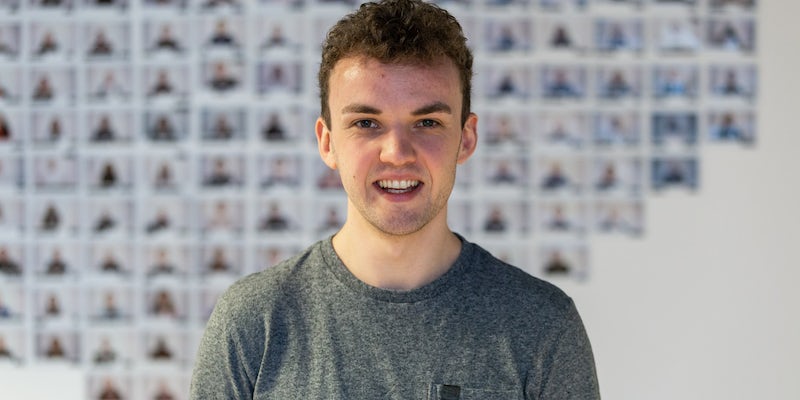 Why I Chose to Retrain as a Software Developer at Northcoders

For the last three years I had been working in project management in the engineering and manufacturing sector. However, about 18 months ago I knew that I needed to make a change. 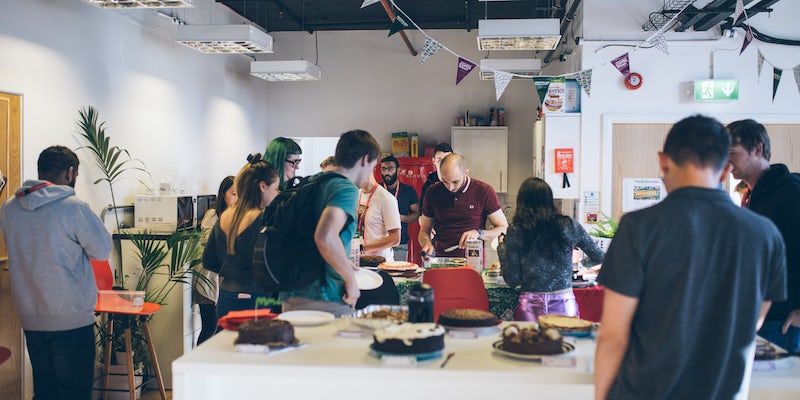 On the 28th of September the Northcoders community came together to support Macmillan Cancer Support's 'World's Biggest Coffee Morning'. 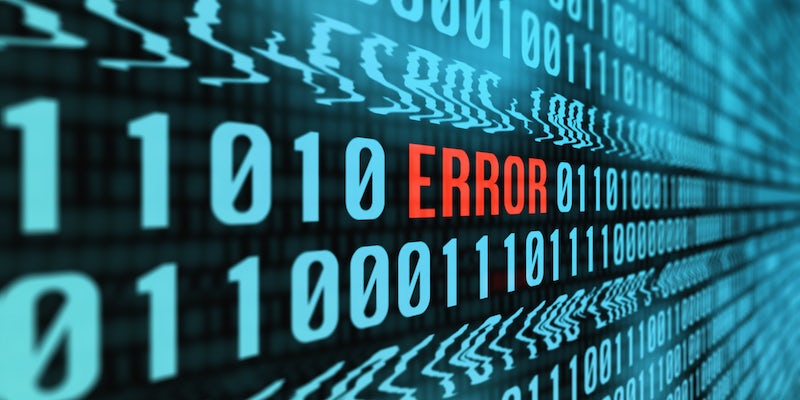 Making Friends with Errors in Your Code

You're trying to solve a coding problem. After writing a few lines, you decide to run it. The terminal explodes with red, unfathomable monospaced text.